Ayurvedic tips to overcome from Anemia

Every day feels like a long one lately. Easily getting fatigued, you're lagging behind every daily activity. This putting you into a state of sluggishness again forces you to give up on responsibilities. Aren’t you finally being conscious about these unhealthy symptoms? Because there are high chances that this could be an indication of iron deficiency, anemia or both. You might have left it unnoticed or it is often hard to identify. Consulting an Ayurveda doctor, help yourself to diagnose anemia in you a bit later. Or even before that by going through this article, let the dots join for you to discover the symptoms collectively in your body. Let Ayurveda help your diet fall into places where anemia doesn’t arrive.

To start with the blood constitution, iron is the most important among the constituents. The hemoglobin protein which is very well-known to everyone is present in the blood and lodges the iron part of the blood. Hence lack of iron content results in blood deficiency or anemia can also point towards iron deficiency. Other than for direct body strength, hence iron content is essential to be maintained to restore blood volume and richness. It is in fact due to lack of iron that oxygen can’t be absorbed to the bloodstream and this is how anemia is getting its connection with hypoxia (a condition in which the organs fail to receive enough of oxygen). Hence most of the symptoms of anemia also have its main roots in relation with lack of iron content, though there are other causes that lead to anemia. However, iron deficiency being the most common, focusing on it, let's look into the ways Ayurveda has been formulated to tackle this issue.

Does pregnancy cause iron deficiency?

Though a pregnant woman's body is capable of producing more blood than usual for the baby’s purpose, still that isn’t sufficient for the mother. The amount of iron often fails to be compensated and also leads to hemoglobin reduction and total oxygen depression for the mother’s body. That is why often doctors prescribe iron supplements to pregnant women. That’s why pregnant women seem anemic often. Pregnant women often seem to be craving for eating ice (pica) as such and this has got a connection with anemia which is explained in another context below.

How to check for anemia if it is doubtful?

Symptoms of anemia might vary depending on the cause but being a very common disease, the symptoms are also common and could be identified even before its diagnosis by a doctor. Some of the symptoms include: 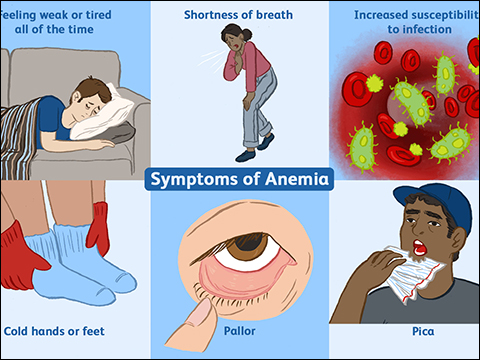 Chart your diet with Ayurveda

Though the treatments for anemia depend upon the conditions the patient is in, still an iron rich diet is something that every doctor opts to prescribe to the patients, whichever state they are in. This diet is seen as a remedy which can be considered as ayurvedic as it includes the routine as per Ayurveda acharyas have mentioned. Also, anything that is natural and organic doesn’t need to be labelled as ayurvedic in particular because they already fall into the ayurvedic category. Let’s see how an iron rich diet could be charted. The aim when saying to increase iron content is basically to upgrade RBC count in one’s body. An anemia diet involves containing foods that help in iron absorption and as well as avoiding the ones that prevent absorption of iron to blood. This is in fact both a good way to start your journey to treat anemia and as well as to continue the same with an alternate way to restart. So to acquire a good amount of iron from external sources, you need to add different types of food to your diet. Let’s see what foods can be adopted. Iron though is present in red meat, still iron fortified products are imported by many to add iron supplements to daily routine.

There are some foods that tend to hamper iron absorption and so it's always better to avoid them or cut down their use. Milk and associated dairy products (cheese and yogurt) , though contain iron, still provide the body with a good amount of calcium that can reduce iron absorption. Similarly, egg with yolk inhibits iron absorption though it contains iron as a constituent. Having the same drawback, it is advised to reduce consumption of beverages like coffee and tea.

Ayurveda acharyas have written down the diet according to one's dosha prakriti (body constitution) and ritus (seasons) that overtake the exogenous factors that determine body health in Upanishads and samgrahas. That’s how Ayurveda personalizes the right diet for each one of us and so an Ayurveda doctor on consulting you will be easily able to prescribe the right anemic diet for your body and mind. Massive doesn’t make anything legit and so though this nutrient deficient disease is very common worldwide, still each of us hold the responsibility to bring down the anemia rates. Leading a healthy lifestyle mainly including iron content rich foods can be one among your goals from now. Take in iron, be strong as iron by increasing the blood count.