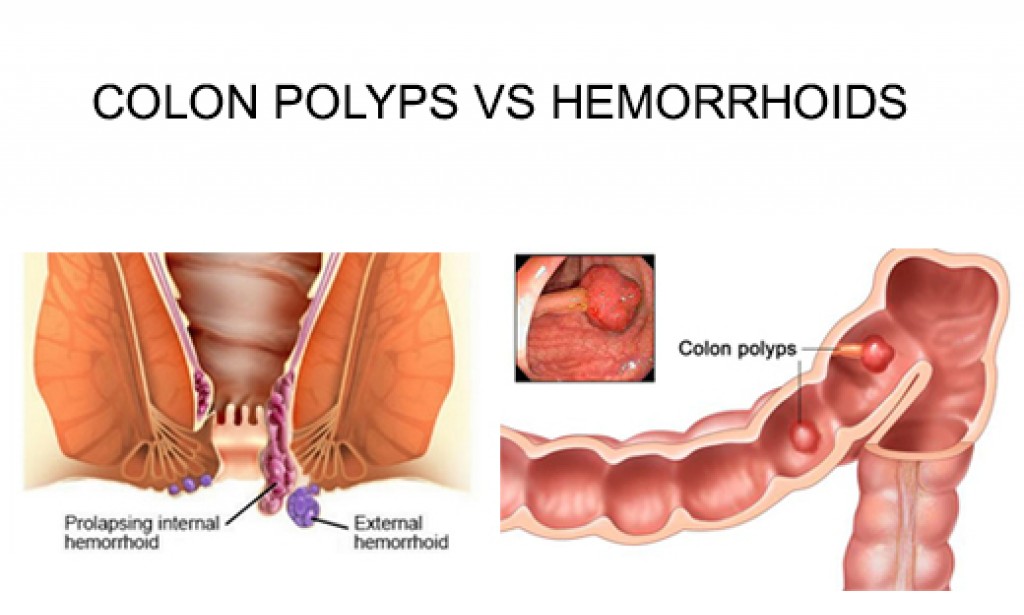 How do you tell the difference between a Hemorrhoid and a Polyp?

When we look back to the time when there was no advancement in technology, people used to be more healthy and had more immunity than people of the 21st Century. They led a more healthy life and ate things that were not adulterated, and as a result, they had a healthy gut. In today's scenario, food supplements are so much adulterated that people have more chances of dying after eating something which they like the most. Nowadays eating anything leads to discomfort and problems in the stomach and intestine. Now let's know something about some conditions caused in our intestinal area that are about colon polyps and hemorrhoids. 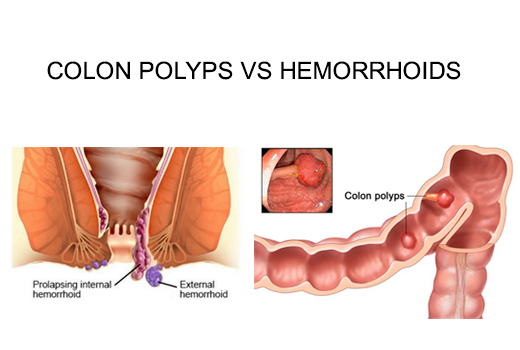 WHAT IS THE DIFFERENCE BETWEEN COLON POLYP AND HEMORRHOIDS

A colon polyp is a condition where a mass of cells grows in the lining of the colon. This lump of cells can be fatal in some cases, as it can develop into cancerous conditions. It is of four types depending on the condition, they are: inflammatory polyp is kind which occur as a result of inflammatory bowel disease or other inflammation in the colon region; hyperplastic polyp is benign; Tubular adenoma is the common type of polyp and if it persists for long then it can turn cancerous; villous adenoma is a kind of polyp that rarely occurs but has high chances of it turning cancerous.

Hemorrhoids are also known as piles are a condition where individuals experience pain in the anal region as the veins in that region get swollen and when stool is passed it causes pain and bleeding. Hemorrhoids can be external as well as internal. As per Ayurveda, hemorrhoids are known as Arshas, according to them, it is a condition where due to the vitiated doshas affecting the skin, muscles, and adipose tissue a lump grows in the rectal region. A colon polyp is also considered the same as that of piles, it is also Kapha pradhan vyadhi. And causes bleeding while defecating.

LET'S KNOW THE SYMPTOMS OF COLON POLYP AND PILES

Colon polyp usually doesn't show symptoms but in some cases, the patient may experience pain as due to formation of polyp obstructs the movement of bowel contents as a result of this is causes cramps, individual may have constipation, or can have diarrhea for a long period, blood can appear along with the stools and sometimes it will be blackish as oxidation of blood inside the colon makes the stool to have that color, the patient may have bleeding from the rectal region even if the person is not passing stools, and in certain cases, due to continuous bleeding, the person may have iron deficiency anemia.

Polyps are the growth of a lump of cells and this happens due to genetic or changes in the internal lining of the colon. Polyp formation can take place due to inflammatory bowel diseases like ulcerative colitis. It can also be formed due to unhealthy eating habits and unhealthy practices like smoking, alcohol consumption, having fast food, food with a lot of fat content, etc promotes deposition of fat or growth of abnormal cells. It is also caused by certain syndromes like peutz jeghers syndrome, Lynch syndrome, Gardner's Syndrome, etc.

In the case of piles, it is mostly caused due to the food habits a person follows. Eating a lot of spicy food, applying strain while passing stools, during pregnancy, people who have constipation, diarrhea, and sometimes it is genetic, if the parent has piles then there are a lot of chances that the person might have this condition.

REMEDIES FOR COLON POLYP AND PILES

Both these conditions can be prevented like any other disease by following certain practices like doing exercise daily, having a balanced diet, quitting certain habits like smoking, drinking, etc. Now let's know some Ayurvedic tips to get relief from these conditions. There is a procedure called kshara therapy which is done to remove polyps. The effective herbs in treating these conditions are many, but let's know about some so that they can be included in our diet or a part of daily consumption to prevent it. These herbs balance the doshas and bring out equilibrium in the body and they are Ashwagandha (Withania Somnifera), Eranda (Ricinus communis), Triphala (Phyllanthus emblica), Bibhitaki (Terminalia bellirica), and Haritaki (Terminalia chebula), Guggulu (Commiphora wightii), Ardraka (Zingiber officinale), Amalaki (Phyllanthus Emblica), Curcumin (Curcumin Longa), Tulsi (Ocimum tenuiflorum), etc. These herbs are very useful as they have antioxidant, antiseptic, properties and help in healing the cut caused due to polyps or piles while passing stools. These have Kapha and pitta shamana properties which prevent the formation of a lump of cells that takes place and also reduce the inflammation in these regions. Ashwagandha has certain chemical compounds that prevent the formation of cancerous cells. Ardraka is very useful in digestion and helps in passing stool without much strain. Curcumin is widely used in many diseased conditions, it has antioxidant properties as well as prevents the proliferation of cancerous cells. Triphala has compounds that help in smooth bowel movements and prevent conditions like constipation. Guggulu has anti-inflammatory properties which heal the inflammation in the anal region. Tulsi enhances the absorption of components in the food and makes bowel movements easy. The digestion of ahara takes place with precision and all rasas are formed and absorbed with efficacy.

So let's try these and find solace from these disturbing conditions. And after all, things that are produced naturally have a pure effect and help us to cure ourselves of diseases without worrying about the side effects.