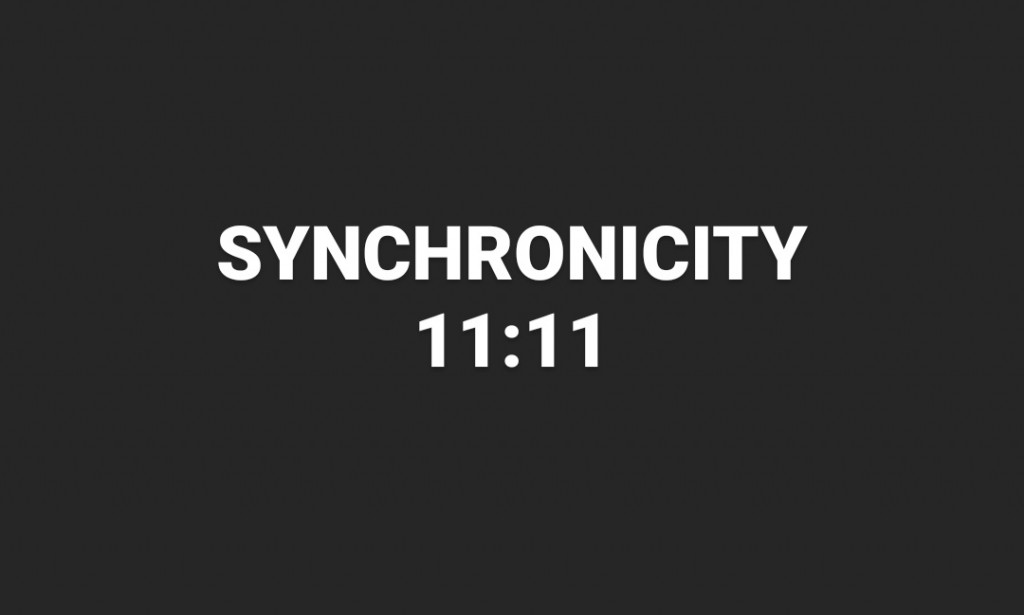 synchronicity is a rather strange, mysterious and a mind-boggling subject that even the founding father of this principle found a great deal of difficulty in explaining it. it was first termed and defined by a 'swiss psychiatrist and psychoanalyst' named CARL GUSTAV JUNG. during his time as a psychiatrist, he enountered a lot of phenomena which made him believe that something mysterious is happening, which seemed very abnormal and strange that it made him to seek for the answers.

So, he then  embarked upon an inner journey and read most of the esoteric, gnostic, eastern, greeko-roman and egyptian literature in the hope that he would find something in them that answers his questions. In his relentless pursuit for answers which went on for years, starting from the early 1920s, he finally, solved the puzzle and cracked the code of REALITY. In 1951, he explained with astonishing detail the 'principle of synchronicity' in the book he wrote, which was published under the name 'Synchronicity - an acausal principle.' ever since then, all the jungians( the successors and followers of jung and his works ) took it upon them as their ambition by using what jung has stated and explained, to dig deep into this principle, explore and come to a better understandable conclusion and thesis.

Now, let's get down to business, contemplate and try to understand with a keen intuitive mind what 'synchronicity' actually is. but, in order to understand it, first, let us look at what 'causality means in simpler terms.

Causality means every effect has a cause and every cause leads to its effect. this link, interconnection and interdependence of 'cause' and 'effect' which can be explained always by the 'intellect mind' in simple manner without any difficulty is what's called PRINCIPLE OF CAUSATION OR LAW OF CAUSALITY, which is very much a natural law of physics that governs the reality we live in, as you would've known by now.

For example, when you push a glass off the table, it falls down to the ground. here, the cause is the force exerted by you. and the effect is glass falling down to the ground. So, everything in our world follows the law of causality. There is no effect without the cause. this is very obvious to us, ain't it? but, that's not always the case as you will see in the further explanation.

Synchronicity is the way of your 'higher self' revealing itself to you. It is a way by which the universe/your higher self/source energy/creator/gods/angels/higher mind/higher will, whatever you call it, revealing itself to you through signs, symbols, recurring numbers, intricate geometric patterns, lyrics of songs, combination of words, visions, dreams, telepathy etc.

There are two types of worlds or call them realities.

The 'world of being' is not only bereft of the 'LAWS AND PRINCIPLES OF CAUSATION, but it is also bereft of TIME. time did not, does not and cannot influence certain realms of consciousness within us. throughout the history of humanity,  there was always a 'minority of people' that knew of both worlds/realities. there was always a kind of a substratum of humanity and of human consciousness that has maintained an awareness of the other world called 'the world of being' which is not time-bound and is not ruled by the LAWS OF PHYSICS and CAUSALITY.

Synchronicities happen and unfold in this timeless world of being. Ancients and shamans used signs and omens which we now call as synchronicities as a confirmation from their higher selves/gods/angels etc, to know if they're in the right direction or on a true path. in this 'world of being' events and experiences cannot be explained causally, unlike in the normal, physical 'world of becoming and unbecoming' in which we can always explain the 'effect' by determining the 'cause'. that is why 'synchronicity' is also called 'AN ACAUSAL PRINCIPLE'. meaning: it is not ruled and controlled by the laws of physics , causality and time.

As a culture we all suffer from the one-sidedness of consciousness or the extroverted consciousness. we are programmed and taught that everything interesting is outside of us and so, we always look out and rarely look within. most of the humanity has lost touch with the other side of reality which is 'the world of being'. there's a minority of humanity that always knew that the real transformative, inspiring and liberating meaning comes by the way of that deeply hidden reality called 'the world of being' which is not only inside of us, but at the same time in a strange and mysterious way it is also stimulated by certain events and certain data outside of us, in the form of synchronicities.

It means that, "In the midst of, sort of worked into, woven into the events of the external world, there is something else". woven into the normal, physical world of causality, time and other dimensional elements, there is something else. As a metaphor, it can be said that, "there is a web of the 'other world' or the 'holy other' that runs through the external world unrecognised, unappreciated and undiscovered, but, it is there. and then on the certain strange circumstances, portions of the web come out and are in your consciousness, in your awareness. and that 'something else' is the POTENTIAL that reveals MEANING and reveals it by way of SYNCHRONICITY.

now, it's time for me to define synchronicity in simple terms. infact, i've been leading up to it now.

Synchronicity is a sign, which at the same time has the potential for a powerful revelation of meaning, which comes about, when a level of 'readiness' or 'openness' or a certain kind of a specific receptivity, is reached or takes place within the human's 'internal being', in what c.g jung would call, that deeper part of ourselves known as 'collective unconscious' , 'objective psyche' etc .

When a consequent awareness arises within you and when the internal readiness and the external sign arise simultaneously at the same time, then we have a synchronicity. 'sin' means together, 'kronos' means time. so, synchronicity means TOGETHER IN TIME. Now, remember a little bit about what we talked above. it is not a matter of cause and effect, the internal reality is not the cause, the external reality is also not the cause, but they happen simultaneously at the same time.

This 'simultaneous happening' causes a kind of a breakthrough in our consciousness, may be not a very big one, but a considerable and a valuable one depending upon the situation. so, when this occurs and most importantly, when we are aware of that, then it causes a certain kind of a fusion, may be even an explosion of a deep and powerful meaning, within the psyche.

Once, a patient of C.G JUNG dreamt a dream about the giant egyptian scarab beetle and didn't know what that meant. So on the next day, when she sat infront of jung and started explaining the dream, at the same time,  jung saw the same insect belonging to the species of the scarab beetle on the window pane in his office. Then came a powerful revelation of meaning to him , which of course, in not revealed to us because of the patient-doctor confidentiality. now, it is important to note that the dream didn't cause the insect to be on the window pane and neither did the insect on the window pane caused the dream to happen the night before. these two events are not causally linked, yet happening simultaneously has brought forth the powerful revelation of meaning. that is why synchronicity is called an ACAUSAL PRINCIPLE i.e which cannot be explained by the laws of physics i.e cause and effect.

Synchronicities happen and unfold in the 'timeless world of being'. all throughout the history of humanity, a minority of people were aware of this TIMELESS and CAUSELESS REALITY. and the more we become aware of these synchronicities, the more we allow them to happen. THIS ART OF MAKING SYNCHRONICITIES HAPPEN is called DIVINATION.'tarot' is a very good example of DIVINATION.

SYNCHRONICITY IS A WAY BY WHICH THE TIMELESS, CAUSELESS, MYSTERIOUS 'WORLD OF BEING' INTERACTS WITH THE TIME-BOUND,CAUSAL, PHYSICAL 'WORLD OF BECOMING AND UNBECOMING'.