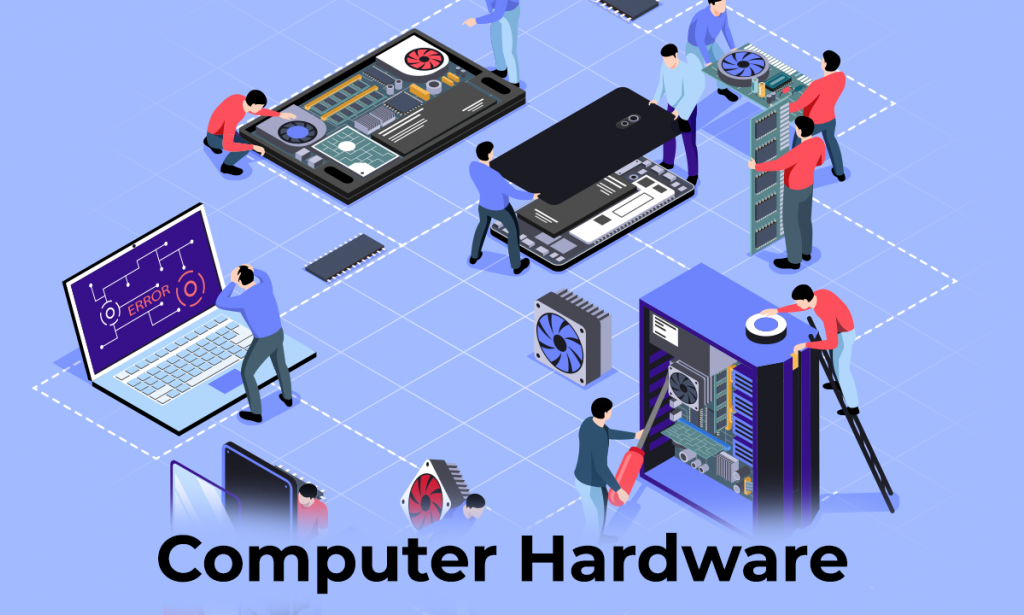 The CPU is the computer's brain in charge of running all the programs and tasks you would typically use your computer for. The storage device stores data such as documents and programs. A computer's CPU is responsible for carrying out all required calculations to process data and information. The CPU also manages all of the other hardware components of a computer.

If you want to learn computer Hardware, get started by taking online courses. Computer Hardware courses are available for free, and some of them also provide reputed certification. In addition, Online Computer Hardware tutorials will teach you the basics and the advanced aspects.

What is Computer Hardware

The CPU is the essential component in any computer system because it carries out all the instructions needed for a computer to function correctly. It can be thought of as the brain of your computer system because it handles all operations required for your computer to run smoothly. It also controls how fast your PC or laptop can perform specific tasks such as playing games or editing videos.

Hardware is an integral part of a computer that gets power from the battery or a power cord. It includes the case, motherboard, processor and memory. Hardware also includes devices like printers and scanners connected to your computer.

However, we need the internal Hardware that puts life into the machine before the external Hardware. So what are those components that are absolutely important?

Here is the essential Computer hardware:

Their motherboards power pCs. All other Hardware runs through it as well as the CPU. So it is one of the essential components in the computer, allocating power where it's needed and communicating with all other components.

You can also determine what other Hardware you can use with your computer based on the ports on its motherboard, such as what type of RAM and graphics card you can use. In addition to the motherboard, another critical piece of hardware lives within the motherboard: the processor.

All information is processed by the CPU (Central Processing Unit) throughout your computer. Gigahertz is the unit of measurement for the speed at which a processor processes information. Therefore, a processor that advertises a high GHz rating will probably perform faster than a similar processor of the same age and brand.

The Random Access Memory (RAM) located on the motherboard is a piece of Hardware. RAM serves as a temporary storage area for data created by programs and provides immediate access to that data. Random memory can be needed for tasks such as rendering for graphic design, editing videos or photographs, and multi-tasking (for example, chatting via Discord while running a game on one screen).

Depending on the programs you plan to run, you'll need varying amounts of RAM. For example, instead of video/graphic design, which uses upwards of 16GB of RAM, medium intensity gaming requires 8GB of RAM when run alongside other programs.

Permanent and temporary data are stored on the hard drive. Various types of data are included here, but it is essentially anything saved or installed on a computer: for instance, computer programs, family photos, operating systems, word-processing documents, etc.

PSU stands for power supply unit. It is the computer part that converts the power from the wall outlet to the electricity needed by the computer. Computer power supplies are designed to provide a consistent, stable flow of electricity to your computer. They do this by regulating voltage and current.

The power supply regulates temperature, noise, and electromagnetic interference (EMI). A PSU can be broken down into three main parts: an input connector, a circuit board, and an output connector.

A GPU is a computer's graphics processing unit. It is a chip that handles the processing of computer graphics and video games. The GPU comprises several components, including the core, RAM, and VRAM. The GPU also has its memory that stores data from the CPU and textures used by the GPU to render images.

The CPU sends data to the memory via a bus, using a bus interface unit to communicate with other system parts. GPUs can be used for general-purpose computing as well as graphics rendering. For example, GPUs are used in video games, 3D rendering and other graphics-intensive applications. They are also used in scientific research to run complex simulations and models.

A GPU can be programmed to perform various mathematical calculations at high speed, including those needed for computer graphics, computer vision or other tasks that require large amounts of floating-point operations per second (FLOPS).

Common Hardware that you'll find on the outside:

Computer Hardware is an essential aspect of our society and future. It makes our lives easier and more convenient. Computer hardware also helps us create, innovate and solve problems in different fields such as health care, education, transportation, etc.

The computer hardware industry has been around for a long time now, but it has seen many changes over the years. Some advances that have happened recently include 3D printing, artificial intelligence and robotics, which are expected to continue to change the way we do things shortly.